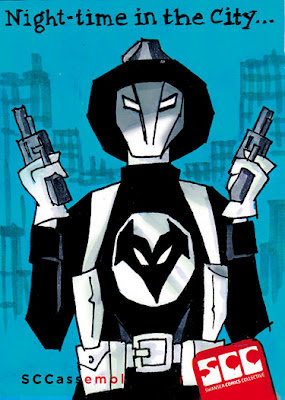 I mentioned the British weekly comic 'The  Mighty World of Marvel' in my last post, it was a cracking read reprinting American stories of the Hulk, the Fantastic Four and Nova among others but in March '79 it was cancelled and replaced by Hulk Comic. At first glance, it looked like it wasn't going to measure up to its predecessor, gone was the glossy cover, the standard of paper generally was worse and it was smaller. But when you looked inside... original stories by British creators such as Steve Dillon, Paul Neary, John Stokes, Dave Gibbons and John Bolton drawing such characters as The Hulk, Nick Fury and The Black Knight. Yet, best of all, was a new character, created by Steve Parkhouse and David Lloyd, Night Raven!

Night Raven was a prohibition era masked crime fighter whose every episode began 'Night time in the city...' and usually ended with the criminals left slumped in an alley with glazed eyes, a Night Raven symbol branded on their foreheads and a note pinned to their chest reading 'Where darkness spreads its evil wings... The Night Raven Stings!' It was incredible with Lloyd's inky art, the trenchcoats, fedoras, blazing revolvers and sinister hero. It was probably my first taste of Pulp, I'd always enjoyed gangster films and wrote a school project on Al Capone but this masked crime fighter was brutal. He didn't mind killing his foes or scarring them for life. Later stories, introduced Yi Yang, an oriental female warlord, and after his strips finished. His story was continued in text pieces written by Alan Moore and Jamie Delano with illustrations by Alan Davis and Paul Neary. In these tales, Night Raven, became indestructible and virtually immortal but was in constant pain and constant conflict with Yi Yang.

He appeared in a mainstream US title called 'Fury/Black Widow: Death Duty' and a mini-series called 'Nocturne' used some of his history but this story since been ruled out of canon by The Official Handbook (OTMU).


Here's hoping for a comeback soon...

Cheers,
This Man, This Pete!

Further Update:
I had the pleasure to meet David Lloyd himself recently and got this great Night Raven sketch card 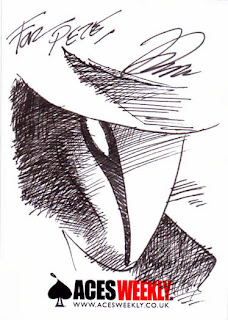