BLART: Design a god for the Swansea Comics Collective 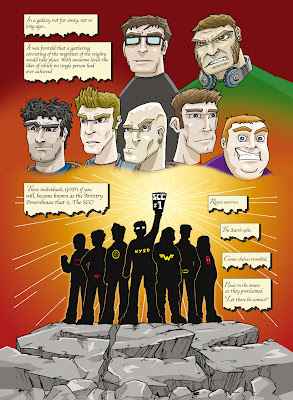 -Mark Tranter
Ooh, this was a tough one, it was the first blart I missed and I still haven't completed it. I know there were a couple more done but they haven't been handed in yet. I'll add them as they trickle in...

After saying all that, what a awesome job Tranter did on his piece. It was a real surprise that he had elevated us
to divine status (and blown our secret identiies in the process ;). From top left that's me and Mark 'Son of Ken' Hughes then Mark Tranter, Lee Philips, Adam Wilmot, Rob Taylor and Ricky Webber, the Illuminati of the SCC. Kudos to Rob Taylor for his sterling colouring job. 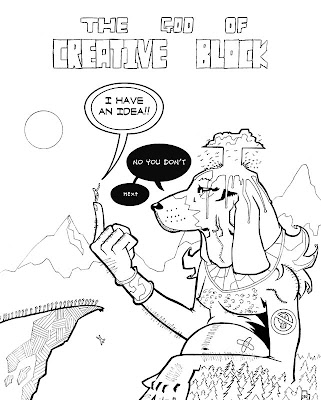 -Lee Philips
At last, one of my favourite blarts ever. I had to drive around to his house and pick it up to scan but it's here. I love the rain cloud on his head, the expression, the pot belly, ah, you get the picture...

Another reason, I like these blarts so much is that they are original pieces and not based on another companies character. Probably, why we had less take-up on this one but definitely worth the extra effort. Well done, guys.