Howdy pardners,
Just read the new updates and after reading Adam's I got an idea for my own recommendation. I much like Adam do see the SCC as a support group for Swansea's comic fans it allows us to get together and just talk about anything and everything, obviously with a main concentration being on comics. Well enough of that.
I went off to Athen's with my school last week and with me I took a few books. One being Fable's volume 11 the other Y: The Last Man volume 1. I would like to recommend the latter, not cause the former is terrible or anything still a cracking read but you need to have read 1-10 first.
Y: The Last Man is the tale of, you guessed it, the last living human male (along with his comedy capuchin sidekick) and his struggles in a now female dominated world where everyone wants to kill him or fornicate with him. The first volume in this 10 volume series is a beautifully crafted set up to one of the best original stories I have read. Why do I recommend it because unlike with the Watchmen I never thought to read it again how wrong I was. It still captivated me even though I still knew what was about to happen. It is a testament to Brian K. Vaughn's exceptional writing ability.  The art is beautifully presented as well the emotions are clear and the designs are realistic. No superheroes here but a story that will keep you enthralled from start to finish. If you haven't read it then what are you waiting for go down to 'Comix Shoppe' and get yourself a copy and if you have already read it read it again you will not be sorry.
Posted by Peter James Maggs at 7:21 PM 1 comment: 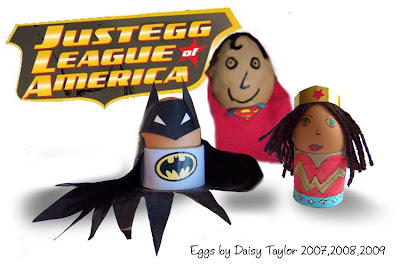 Here's some pages from the Swansea Comics Collective Sketchbook. It's our group drawing book that gets passed around each meeting. Anyone is allowed to add their scribbles whether it is comic related or not. C'mon down and make your mark... 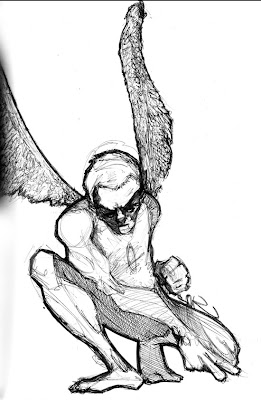 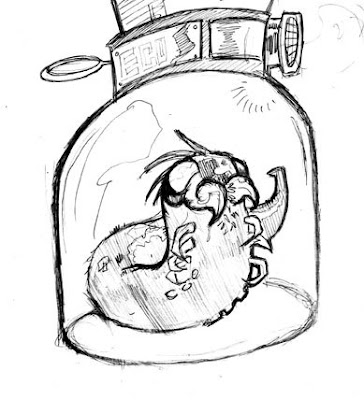 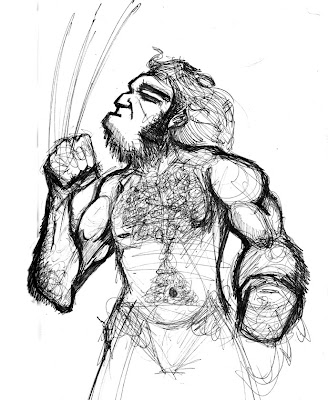 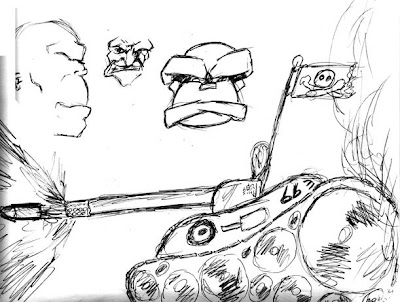 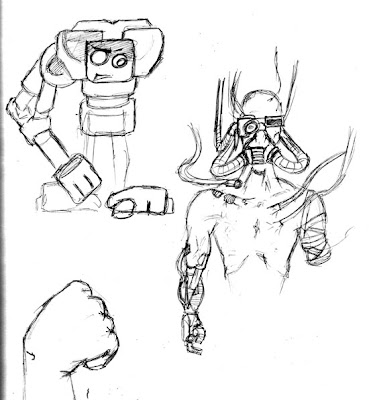 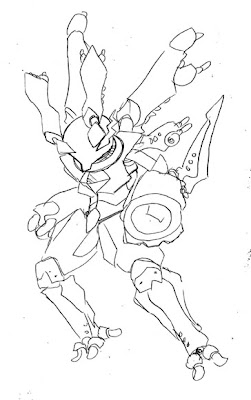 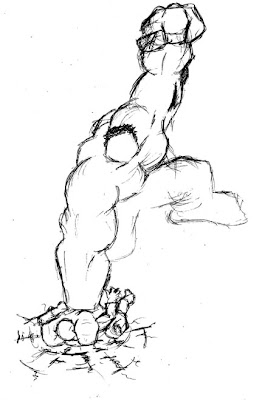 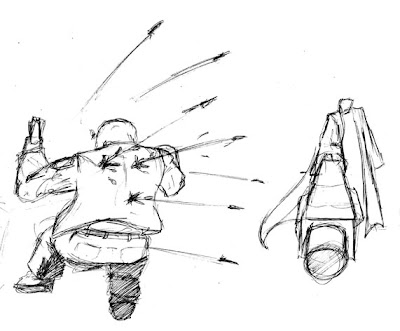 From our secret headquarters...

A shadow drifts through the empty base. The silent alarm is tripped. The signal is sent. I don my costume and race to our HQ ready to face whatever nefarious, evil thing has penetrated our defences.
Oh... it's just a cat.... Bugger. I squeezed myself into my skin-tight, rubber cat suit for naught but a pussy cat! Oh well, while I'm here I may as well do something.

Meeting up with my fellow comic-philes is like an AA meeting of sorts. It allows us to support each other for one. It lets us know we are not alone (I told myself I wouldn't cry). Together we can fight our addiction. Sadly, I think ours is a losing battle. You can see it in their eyes, they lust after those pristinely printed and pressed pages. The smell of ink on recycled paper. I NEED ONE! I MUST HAVE ONE!!! NO! No! I must calm myself, I don't sign on for another few days and can't afford my 'fix' yet.

Recently I borrowed my friends X-Men Essentials #1 graphic novel. Although I like the X-men I've never bothered with more than a look-in now and then. So reading this awesome collection (and it is pretty awesome) was like a lightning-bolt. For those of you who don't know what the hell I'm going on about X-Men Essentials #1 introduces characters like Wolverine, Colossus, Nightcrawler and Storm to the ranks of the X-Men. I found it quite a buzz to see their induction in print form, even though by today's standards the first few issues -written over three decades ago- look a little cardboardy now. Then, just a few days after, he handed me X-Men: Deadly Genesis -written only a year or two ago- which was a big thing (trust me those of you who don't know, it really is). Basically The first issue of Essentials has the new X-Men rescuing the original X-Men from the monster/island of Krakoa after a brief but intensive training 'montage'. What Deadly Genesis does is reveals that the new X-Men weren't the first team sent out to rescue the original team. I'll leave it at that. Think of it in a round about way as 'My Recommendation'.
Posted by Wagonovic at 10:40 AM 2 comments: