Who's your Comic Book Crush? with all round good guy and occasionalcomic book creator Matt Timson 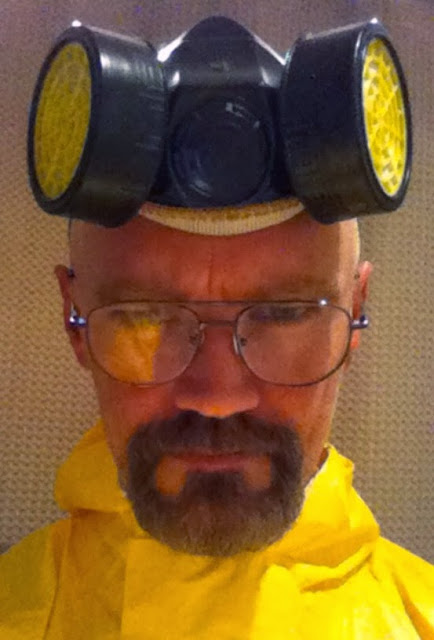 
Matt Timson was born in 1970 and is almost as old as he looks. He has been a full time illustrator since 1998 and, since 2008, has drawn a literal handful of comics for Image, Top Cow, and Self Made Hero. He is currently working on LogicEngine, a creator owned labour of love. It's going very slowly.
WHAT WAS YOUR FIRST COMIC AND DO YOU STILL HAVE IT?

It was an Avengers comic and I was about 3 or 4 years old. I was visiting my Gran in Mablethorpe and I remember being confused about the fact that Giant Man's hand was so big as it pushed through a door (although I didn't realise that it was Giant Man at the time. In fact, I probably couldn't even read). I don't have it anymore.
DO YOU BUY COMICS REGULARLY?

Not really. There was a time when I'd buy everything my local newsagent had to offer- and then I worked in a comic shop, so I read everything that came through the door. Comics are just too expensive now, though and I don't believe in pirating them, so I limit myself to trades of stuff that comes recommended. That said, I've started buying more digital- but usually only when it's on sale.
WHEN YOU BUY A TITLE IS IT FOR THE STORY, CHARACTERS OR THE CREATIVE TEAM?

Usually the creative team- or if the story comes recommended.
WHAT WAS THE LAST COMIC YOU BOUGHT?

That would be Lex Luthor, Man of Steel- through Comixology. It was on sale and I just liked the look of it.
HOW DO YOU PREFER TO READ, DIGITAL OR PRINT?

Print- but that will probably change if I ever get myself an iPad.
YOUR FAVOURITE ARTIST(S)?

Ooh! Lots! Top of a long list would have to be Bill Sienkiewicz, Dave McKean, Alan Davis, Frazer Irving and Jock. And classic Bizley. All for different reasons.
YOUR FAVOURITE WRITER(S)?

Grant Morrison and Alan Moore. There are more, but it's difficult to choose- so I'm going with the two that have had the most profound effect on me as a reader. It's a shame they don't get on- I'm never going to be able to invite them both round for tea and buns at the same time.
WHAT COMIC(S) HAVE PROVEN MOST INFLUENTIAL?

Another difficult one, but probably Moore and Davis' Captain Britain run. It was the benchmark for a long, LONG time, as far as I was concerned. Anything by Jock- he's got a great eye for interesting layouts that make the experience enjoyable, even if I don't like the story that much.
EARTH IS DYING! BUT YOU’VE WON A SPOT ON THE SPACE ARK LEAVING EARTH!
YOU’RE ONLY ALLOWED TO TAKE 5 COMICS. WHICH ONES DO YOU TAKE?

Meh- I'll give up my spot to somebody a bit more useful. Honestly, I've got thousands of comics- no way I'm picking 5! 5 trades, *maybe*. I don't know what off the top of my head, though. Thing is, those 5 comics (or even 5  trades) would eventually become your own personal idea of hell. You'd probably be willing to trade your left nut for a different 5 after a while.
YOUR FAVOURITE OR MOST MEMORABLE COVER?

Annoyingly, I keep thinking of Jock's Joker cover- the one with the Joker's head made of bats. It's not really my favourite, but every time I come back to this question, it's the one that pops into my head- so it wins by default!
WHO’S YOUR FAVOURITE CHARACTER?

Probably Johnny Bates. Or Zenith. Hmmm… Zenith.
ARE YOU READING ANYTHING ELSE AT THE MOMENT?

I've usually got several books on the go, so I'm probably not reading any of them properly. Amazingly, I've been reading 'Fear and Loathing, on the campaign trail,' by Hunter S Thompson, on and off, since I bought it around 1990. I haven't finished it yet. I've also just read the rather catchily titled, 'Physics of the Future: How Science Will Shape Human Destiny and Our Daily Lives by the Year 2100,' by Michio Kaku. Interesting stuff, but it does makes modern life seem a bit rubbish.
WHAT MAKES YOU WANT TO CREATE COMICS?

I've recently realised that for me, it's less about creating comics and more about telling stories. I really just want to write and draw my own stuff- and I'm probably going to do that in comic form. Or really bad prose. With lots of illustrations.
DO YOU WORK WITH A REGULAR WRITING PARTNER?

No- although I have a hit list of writers that I'd like to work with. Only managed a couple of them so far, though.
WHAT ARE YOUR WORKING METHODS: DO YOU SET YOURSELF DEADLINES? OR DO YOU WORK WHEN THE MOOD TAKES YOU?

Deadlines for regular work, but when the mood takes me for my own stuff.
HOW IS YOUR ARTWORK PRODUCED? DO YOU USE TRADITIONAL TOOLS OR DIGITAL OR A MIX OF BOTH?

All digital. I use Photoshop, Painter and Manga Studio. Photoshop is still my main drawing tool, but I'm trying to fully migrate to Manga Studio.
FAVOURITE THING TO DRAW?

Heads. All heads, all the time.
WHAT’S THE WORST BIT ABOUT DRAWING COMICS?

I'm never happy with what I've done once it's finished. I get that with pretty much everything I draw, to be honest- but it feels even more pronounced with comics. Maybe it's because they take me so long? Also- the pay is abysmal. ABYSMAL!
DO YOU GO TO CONVENTIONS? DO YOU ENJOY THEM? WHICH IS YOUR FAVOURITE?

I do go to conventions, just not as often as I'd like. Traditionally, my favourite has always been Bristol, even though it's a bit of a pig to get to. Everybody I know rates Thought Bubble as the best, and I've managed to buy tickets and book a room three years in a row, without ever actually getting there (a mixture of illness and deadlines). This year, I just decided that I wasn't going to go and that was that. Maybe next year. I say that every year, mind.
WHAT’S THE BIGGEST CHALLENGE TO SMALL PRESS/INDEPENDENT CREATORS?

Well, it's different for everyone. For me, it'd be getting paid- but for somebody else, it might be something as simple as a lack of exposure. I do know a few people that are desperate to get on in the industry and I really feel for them when they can't get people to buy their stuff- even when they're practically giving it away.
WHAT ARE YOUR FUTURE PLANS AND AMBITIONS?

To live until at least 2050. Ray Kurzweil has assured me that if I can make it that far, I can live forever. I mean I might not want to live forever- but it's nice to have the choice, isn't it? Slightly shorter term, I'd like to get on and finish LogicEngine, my own creator owned wotsit. It's mostly written and just needs drawing.
WHO WOULD WIN IN A FIGHT, JUDGE DREDD OR CYCLOPS (SCOTT SUMMERS)?

Hmmm… I want to say Dredd, because he's a double-hard bastard and no mistake. Sadly, I think that the guy that can reduce your head to a mushy pulp just by looking at it will win the day.
WHICH COMIC CHARACTER DID YOU WANT TO BE WHEN YOU WERE YOUNGER?

Probably Spider-man- but I definitely went through phases of wanting to be Iron Man and Billy The Cat as well. I made my own Iron Man suit out of cardboard- it was ace!
AND WHICH WOULD YOU LIKE TO BE NOW?

Probably Marvelman. Or Miracleman. Or whatever they've decided to call him now. Ken? Ken's a good solid name.
AND FINALLY...
WHO IS YOUR COMIC BOOK CRUSH?

That would probably be Selene, the X-Men bad guy. I remember her outfit and the whole sucking the life-force out of her victims making me feel extremely funny in my tummy at the tender age of 13. I've always fancied bossy, domineering women. Even the ones written by Chris Clairmont.

Thank you Matt for taking the time and effort to get involved.
You can pop along and thank Matt for taking the time to fill out our questionnaire and follow his comic book adventures at any of the links at the bottom of the page, you can also get a look into his real life adventures on the likes of Instagram too, he makes a mean Walter White! Keep an eye out for Matt's up and coming creator owned LogicEngine, it already looks killer. It's worth having a gander at Matt's Instagram for the awesome Starbucks Sketches, which will soon be for sale on Matts store, fancy one? Hit him up, side the head and tell him to get a move on!!! 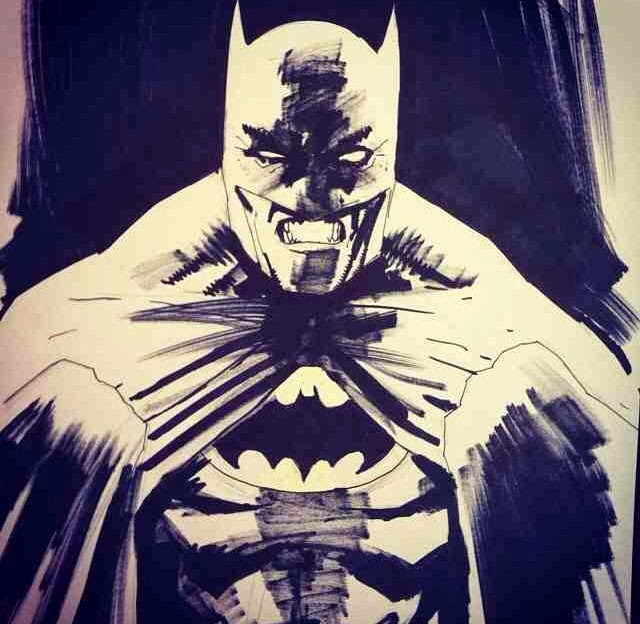 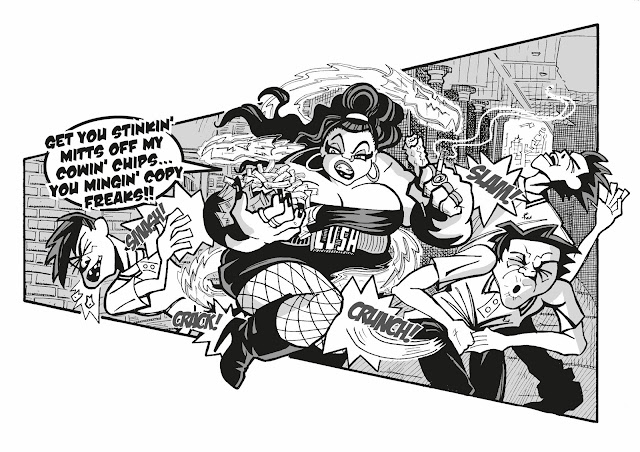 A sneak peek of one of the new heroes introduced in Copperopolis issue 2: Lush, the Wind Street Wonder. 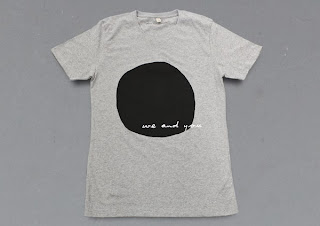 Stuck for a present this holiday season? Head on over to It's Plain & Simple and treat someone to a quality Tee and you get to feel good about supporting a good cause.

It's Plain & Simple produce well designed, hand printed tees, ethically. They use organic cotton, eco inks and recycled biodegradable packaging. With every purchase, £5 will go directly to the chosen monthly cause. This month it is The Northern Ireland Cancer Fund for Children 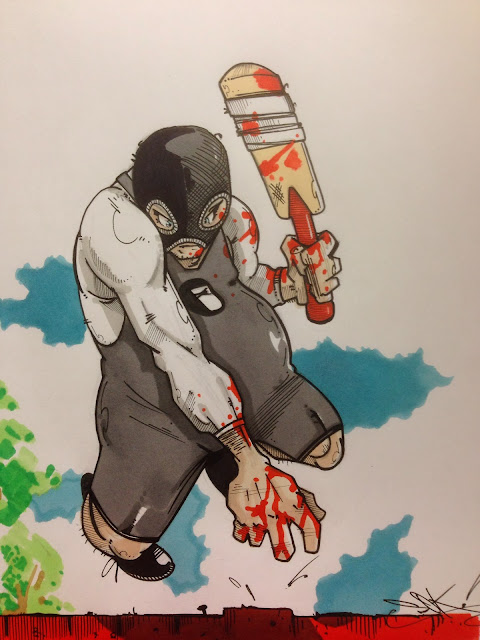 The Echo figure study by SonofKen. 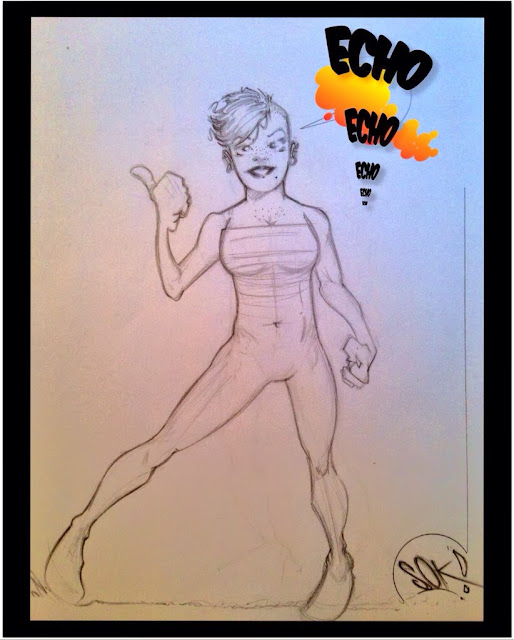 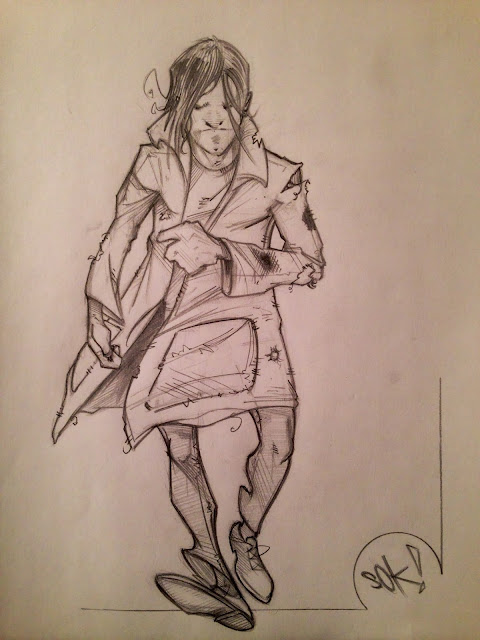