What happens at a SCC meeting? Well I'll tell ya exactly what happens.

First Happy New Year. Second Pete’s asked me to post up a bit about the last meeting just before Christmas. So here I go.

It was a rather intimate affair. Myself, Pete, Mark, Nick, Lee and Adam met up at the No Sign bar for our ‘Christmas party’ meeting. The meeting generally centred on cool comic related banter and us jamming on my proposed idea, now entitled ‘Gaslight’ Thanks to Adam. It all started with my idea for an alternate reality Victorian London after seeing this pic:-

I liked its visuals and the possible story points like why would they need the gas masks in Victorian London. Which is now deep in development on the Group. At the meeting the idea seemed to get everyone’s creative juices flowing. From the small design I had already done the page erupted with words and images. 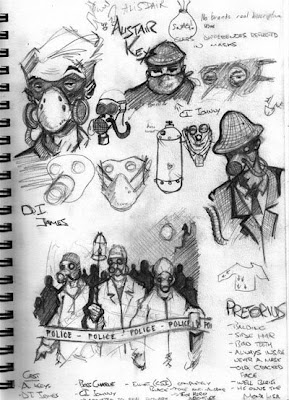 Me and Mark, but mostly Mark, armed with just a pencil sketched images all over the page, while nick acted as a scribe for his own and everyone’s ideas for character names and profiles along with simple setting and plot points. I was excited that my idea (admittedly partially stolen but I prefer to use the old inspired by approach) had inspired so much creativity among the small group there. If anyone was ever in doubt about the group this should be proof enough that it’s a roaring success.

This isn’t the only story the talented people in the SCC have created we also have Daniel’s ‘Greg’s Birthday Pen’, Nick’s ‘Space Race’ and ‘Fighting T.O.M.M.Y.’, Adam’s ‘The Squibs’, Anna’s ‘Knife’s Edge’ and ‘Huail’, Lee and Ricky’s collaboration on a ‘Zombie/Post Apocalyptic Western’, Ian’s ‘Untitled as I can’t think of a snazzy title’ and last but not least Dan’s ‘Deadmeat’. Check the links for more on each of the stories.

Also I’d like to inform anyone who doesn’t already know that the next meeting will be in the Brunswick at 8pm on the 21st of January. So come along bring your ideas and share them with the rest of us.

P.S. All ownership for the first pic goes to Boatwright all other pics are owned by me.