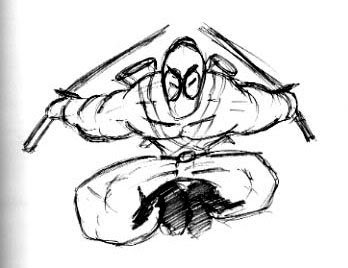 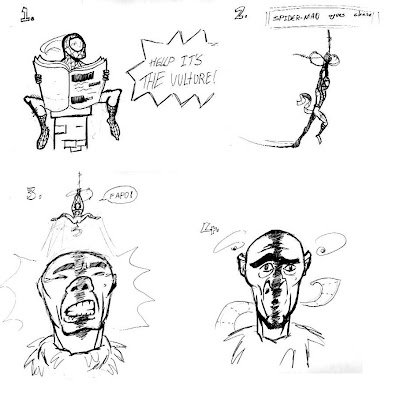 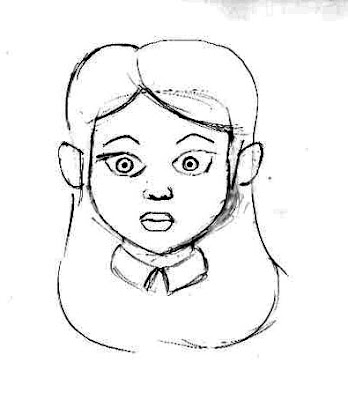 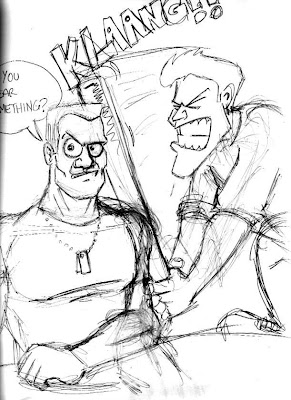 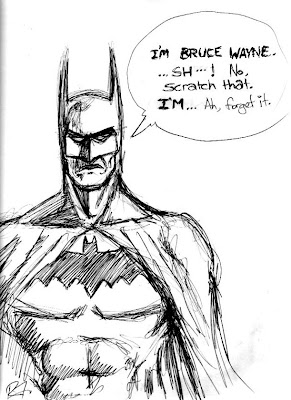 Email ThisBlogThis!Share to TwitterShare to FacebookShare to Pinterest
Labels: sketchbook

Okay, so, following in suit with Petey-boy I think I will list a few 'Must Reads' only I wont call them 'Must Reads' because 'Must Read' sounds too forceful. I'll just 'suggest' all of you out there may want to consider, possibly, if-it-isn't-too-much-trouble, maybe picking up from the Comix Shoppe (plug plug) the following:

1. Batman: Vampire
This is a great graphic novel that collects the 'Tales of the Multiverse' Batman vs. Vampires trilogy together in one place.
The starting piece, Red Rain (written 1991) tells of Batman's struggle with the good ol' Prince of Darkness himself. And (without trying to give too much away) Gotham's billionaire playboy is beginning to feel not quite human himself. There are some great scenes set up and an explosive battle at the end (somewhat reminiscent of the classic Hammer Horror flicks); which leaves us, in the closing panels, with a much darker Dark Knight. Oh and check out his arms when he is under cape and cowl!
Bloodstorm (written in 1994), is the sequel to Red Rain; Batman is now struggling to control his new found power, a lust for blood forces him to create a blood-like serum knowing the real stuff will tip him over the edge. Meanwhile the Joker seems to be revelling in his new found place as the (completely alive) leader of the remaining undead. Batman meanwhile finds solace with a Miss Selina Kyle a.k.a. Were-CatWoman(?). Joker's constant attacks drive Bats towards a tragic confrontation that could tip him over the edge. The final few pages of the fight are satisfyingly nasty. The closing panels brilliantly depict a scene that has been repeated time and time again (minus any sense of atmosphere or foreboding) in countless Dracula rip-offs.
Crimson Mist (written in 1999) concludes the trilogy nicely, in OTT style. Batman *ahem* 'rises' once again to deal with Gotham's villains and this time he isn't looking to lock them safely back in Arkham Asylum. Now devoid of any remorse (or skin it seems) Batman hunts down his old foes and dispatches them, with satisfyingly gory results. Harvey "Two-Face" Dent and Killer Croc seem bent on stopping the undead Dark Knight; and once more Dracman, uh, I mean Batman battles on. This time with enemies who seem almost to match him in strength and violent intent. Caught in the middle are Commissioner Gordon and Alfred Pennyworth, who wish to stop Batman as much as they wish to help him, believing some scrap of the old Bruce Wayne still exists under the cloak. I don't wish to spoil the ultimate(?) ending, but the final panel -a full page image- seems to give some finality to the whole thing.
All three books in the trilogy are written by Doug Moench and pencilled by Kelley Jones so there is a feel of continuity in that respect throughout the books (all though they could work okay as stand alone comics).
The "What If?" element and the subject matter seem to reduce the impact somewhat so this one isn't going to change your life but it is as satisfying as it is violent and I recommend it as a pleasing distraction.

2. Superman: Red Son.
Most people know this one and so it may have been recommended dozens of times before... but not by me! Until now, I highly recommend this one! It is written by The Mark Millar (that's right, "The". Not: "Mark Millar", but "The Mark Millar") drawn by Dave johnson and Kilian Plunkett and coloured by Paul Mounts. It is another "What If?" story this time the premise is very simple: What if little Kal-El had landed, not in the farm lands of Kansas, but the potato fields of Mother Russia? We jump some years forward and Superman is a hero to the Soviet Nation, adoptive son of the nation's leader and sports a hammer and sickle upon his chest instead of his legendary 'S'. We follow him through three chapters (separated by 'ages') and most of the staple characters appear including Lex and Lois Luthor (nee Lane), Bizarro, Brainiac, Jimmy Olsen and Perry White, Wonder Woman, Green Lantern and Batmankov (yes you read it right, that isn't a typo). This Superman has to leave the hard way that: "With Great Power Comes Great Responsibility" .....No, wait!? That's not right!
Seriously though, it paints a different 'Man of Steel', brought up with very different ideals. And the culmination of the closing pages will have you smiling as a great twist is revealed. The scope of the story progression can be best summed up in one word: 'Full-circle'. Okay that's two words but you get the point. READ IT!!!

Next time... more stuff I found under my bed!
Posted by Wagonovic at 2:50 PM No comments: