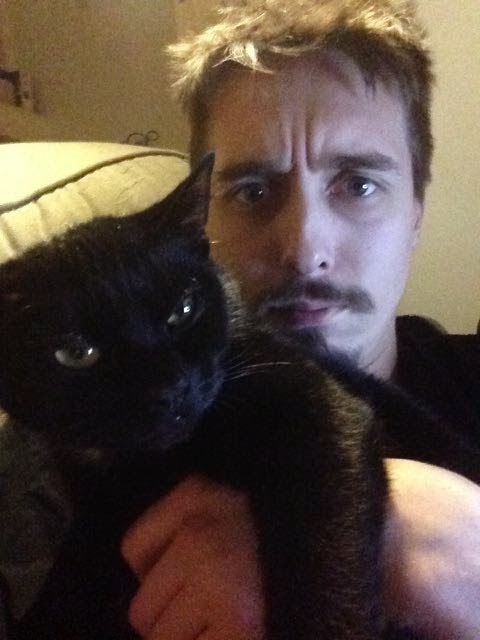 Frank was born in the 80s and hasn't learned how to let go of that. He spends most of his time watching the first two Terminator films, (the others don't count), Robocop, Aliens, Die Hard... the list goes on. The rest of the time, he writes and drinks cheap whiskey, all the while lamenting the fact that his dream of ridding the city of crime Streets of Rage-style as a kung-fu cyborg, with Ronda Rousey will never come true. Frank lives in Liverpool, with a long-suffering woman who loves him, a selfish cat who hates him and a hedgehog who doesn't really care either way, as long as he gets fed and left alone.

I can’t recall what the specific issue was, but I started reading comics with the Transformers series from Marvel UK when I was very young, I think I was about four or five. I seem to remember collecting well over 200 issues of that one. I don’t have any of them anymore, as my mum chucked them all out one day. You know, like mothers do.

DO YOU BUY COMICS REGULARLY?

Yes, but I end up buying more digital copies now and then buying the trades in physical form to save on space. I’m a bit behind on a few titles as I’ve been really busy for a while now.

It really depends. Obviously, there are certain creators that I know I love from years of reading their books. That said, I’m always game to pick up a title from someone new if the concept grabs me. I think that’s the problem with most of the creative industries and some fans today, people are rarely willing to give something new a chance.

Well, since today is new comic day, it’s Southern Bastards #14. Fantastic series. In fact, it’s a good example of the best of all worlds for me. It’s a creative team I love, making a book in a genre I love.

I prefer print, it’s just that I’m running out of space in my flat for all the single issues.

Picking a favourite artist(s) is a real tough one for me because there are just so many people I admire. Also, I think it really depends on how their work marries up with the particular genre they are drawing for. For example, I’ve had an idea in my head for a book for years now and I simply can’t imagine anyone but Amanda Conner drawing it, (so it’s probably just going to stay in my head!) Here’s a few artists off the top of my head that I particularly like, (in no particular order):

P.S. Obviously, Marco ‘Sbrillo’ Fontanili is up there for me, as is Asela De Silva, (a hugely talented artist, with whom I’m also working on a project with).

Again, I could go on for ages, but instead I’m going to subvert the question a little by listing the writers whose work I really enjoy and have also been my biggest influences. Those would be:

EARTH IS DYING! BUT YOU’VE WON A SPOT ON THE SPACE ARK LEAVING EARTH!

WHICH 5 COMICS or COMIC SERIES DO YOU TAKE? THESE WILL BE THE LAST COMIC BOOKS IN THE UNIVERSE!

I’m not sure if I could pick just one, but the first one that springs to mind is Preacher #66. It’s just that shot of the Saint of Killers standing before a host of attacking angels, ready to draw his gun. Absolutely badass. I’ve always loved Westerns and ‘The Saint’ is just the epitome of the stoic anti-hero to me. Also, it’s Glenn Fabry. His art is always stunning. 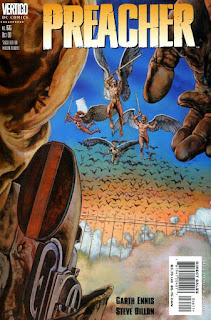 I’m going to sound like a broken record here, but it’s really hard to pick just one! As I alluded to previously, I tend to lean more towards anti-heroes. So, here’s a few: The Punisher, Jesse Custer from ‘Preacher’, Billy Butcher from ‘The Boys’.

WHAT MAKES YOU WANT TO CREATE COMICS?

I’ve loved comics ever since I was four years old. Honestly, I’m in my 30s now and I know I wouldn’t be content doing anything else.

I was a very unhappy and lonely kid growing up. Comics provided me with some temporary escapism that inspired me and helped me feel more positive. If any of my books could do the same for even one person, that would make all the effort worthwhile.

WHAT ARE YOUR WORKING METHODS: DO YOU SET YOURSELF DEADLINES? OR DO YOU WORK WHEN THE MOOD TAKES YOU?

Honestly, my methods are pretty chaotic. I try to set myself a general deadline, but I find that if I try and be too rigid, my work suffers. I’ve definitely got better over the years, though.

HOW DO YOU LIKE TO WRITE? DO YOU USE TRADITIONAL TOOLS OR DIGITAL OR A MIX OF BOTH?

I used to scribble in a notepad as my first draft, the re-draft it when I typed it up, then do a final draft after that. Now, I just tend to type it all. My Notes apps on my Mac and phone are full of random bits of dialogue that I’ve thought of at 3am.

Editing! Hammering out reams of dialogue is far easier and quicker than making it all fit concisely and smoothly over 22 pages.

DO YOU GO TO CONVENTIONS? DO YOU ENJOY THEM? WHICH IS YOUR FAVOURITE?

I’ve gone to a few conventions in my time. I enjoy them, but I probably don’t get as much out of them as I could due to my social awkwardness. N.I.C.E, Thought Bubble and I.C.E. are great cons and are better for people who are more interested in comics than meeting a TV actor. I’ve got a table at Horror Con in Rotherham this year, which is pretty cool. It’ll be my first time as a vendor and they’ve got some awesome guests lined up.

DO YOU USE SOCIAL MEDIA? IF SO WHERE CAN PEOPLE FIND YOU?

Well, I’d say it’s getting noticed, by fans and publishers alike. Lets face it, we don’t have nearly the reach of the bigger publishers and a lot of people simply won’t take you seriously if you don’t have a major title under your belt. This is my sixth year of trying to ‘break-in’, so to speak. It’s ridiculously difficult. It’s a catch 22, really. Once you’ve established a moderate hit, it’s that much easier to get further work. So, yeah, I’d say it’s getting noticed and attracting strangers to read a book by people they’ve never heard of.

WHAT ARE YOUR FUTURE PLANS AND AMBITIONS?

I’ve got a ton more ideas in my head and a few things in the pipeline. I’m writing a screenplay, a fairy tale set in space, a sci-fi action comic. Lots. Right now, I just want to get ‘Bastard Son: Murderborn’ printed and read by people. Marco and I are very proud of it. 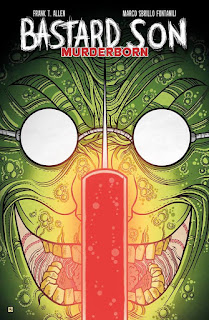 WHO WOULD WIN IN A FIGHT _The Borg_ versus _The Thing from ‘The Thing’_?

I’m not sure who would assimilate who.

Dr. Manhattan. I like the idea of being able to sit on Mars for a bit of peace and quiet.

Wonder Woman, because I think she understands society about as well as I do. Also, I’ve always admired a woman who can fight. Also… Come on, it’s Wonder Woman.
Posted by SCC Assemble! at 9:44 PM