You should probably be reading this...

I read this the other day... 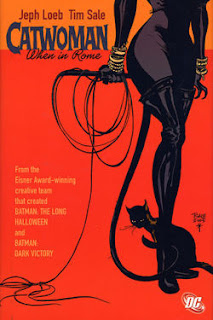 Catwoman: When in Rome

Okay, first off, Jeph Loeb and Tim Sale rarely put a foot wrong -in my mind- when they work on a Batman/Batman-related story. This is no exception, I enjoyed it alot. For those of you who haven't read Long Halloween (!) Selina Kyle/Catwoman suspects (semi-spoiler) Gotham's Mafia kingpin, Carmine Falcone, of being her father. So in When in Rome, Selina travels to Italy to try and uncover a few truths about her parentage. The Riddler tags alongside, serving as Selina's lapdog of sorts. There are a few comic moments, where Edward gets a bit too close to Selina, and she reminds him of the importance of 'personal space' in her own special way.

Nothing runs smooth for the Anti-Heroine; briefly lost luggage (containing her costume) and the death of her only real lead (a local Don) are just the start of her woes. Soon she is blamed for the murder, hunted by the Don's vengeful son, super-villains (and their weapons) keep cropping up, and to top it all off, she keeps dreaming of The Batman, only she keeps on mistaking him for Bruce Wayne... hmm...

The story itself is quite good (I like Jeph Loeb's writing style alot), although it doesn't have the same 'epic' feel as Long Halloween or Dark Victory, it still keeps you interested. It is essentially an off-beat detective story, so more than just a few twists and turns arise along the way. The 'big reveal' at the end puts all of the pieces of the murder mystery together, but is a bit lacking in originality (when the 'mastermind' is revealed I kicked myself for not figuring it out myself). The main plot is only a half reveal, though the reader learns than Selina, but it ties things up neatly for the end of Dark Victory.

If you don't know Tim Sale's style, the easiest way to describe it is 'big panels'. Every now and then you'll come across a full page panel and you'll stop to take in the details. For the Batman comics, Sale usually chooses darker or dulled hues, and alot of the panels are cloaked in shadow, but the line work is always intricate. 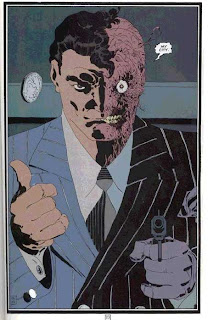 Here's an example from Long Halloween.

So, you should really, really, consider reading Catwoman: When in Rome. If the promise of panel upon panel of Selina Kyle dressed up as Catwoman; or, of her in various states of undress, don't do it for you. Then maybe the promise that you'll catch more than just a glimpse of Edward Nygma (at one point) wearing the costume too. I swear, it is so funny!

Posted by Wagonovic at 2:33 PM