More things I've read, and that you all should read too, y'know, if you haven't already I mean, yeah.

First off, I'll be at the Workshop tomorrow. I'll be the one sitting at the 'Defenders' table.
PLEASE SIT WITH ME!!!
Anyway!
I've been reading all sorts of great stuff recently. Okay, so: Fantastic Four: The End. 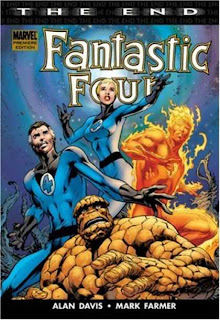 Fantastic Four: The End. Written/Pencilled by Alan Davis and Inked by Mark Farmer.

Here is a picture!

I very rarely pick up Fantastic Four when perusing the shelves of the Comix Shoppe or the new Library (where I pick up most of the comics that I read now, 'cause I'm a jobless bum). But I think I'll have to change my ways after reading 'FF: The End', because it was great.

It comes under one of my favourite sub-genres: 'What if...' For those of you who have yet to read it: The End begins a few years in the future, We find the FF in their 'final' battle with Doctor Doom, who is now more robot than metal man. Things take a turn for the tragic, and two of the FF's loved ones are dragged into a void with Doom, lost to the Four (forever?). We then jump several decades into the future; the Fantastic Four, although not officially disbanded, have gone thier separate ways. Johnny is no longer the headstrong youth of years ago, but now the Leader of the New, New (?), Avengers. Ben Grimm lives a happy and peaeful life on Mars with his wife Alicia and their children. Sue spends her time exploring, on archeological expeditions alone. Meanwhile Reed is one of the most famous men alive, having extended the life expectancy of every human on earth, eliminated cancers and diseases and advancing earth-science; allowing humantiy to join it's stellar neighbours on the galactic council. However, Reed spends his time all but alone in the FF's space station, working endlessly and blaming himself for the events of the past.

Super Villains, by this time have either fled to the colony worlds, or fight pointless, fruitless battles with the heroes. Something is happening out of sight however, something is not quite right. Behind the scenes plans are being made and an invasion is being mounted. I wont spoil it for you, just read it! The final pages are great; as the invading forces come up against the Avengers (who seem to be more like DC's JLA in these times) and clash in space, the rest of the FF find that Sue may have found a 'key' to their past.

One of the things I like most about FF: The End are the characters, and how time (and in a few cases science) has changed them. Take Iron Man for example; he is now nothing more than a ghost, only his consciousness remains. He jumps between Iron Man 'shells' when in a hurry or if one is destroyed. Ben Grimm is finally happy too, he is no longer trapped in his rock-like form, but finds, oddly enough, that people like the old Thing better.

That's enough of my odd, disjointed and rambling observations I think. Until next time anyways.

Posted by Wagonovic at 2:57 PM