Who is your Comic Book Crush with Jay Fosgitt 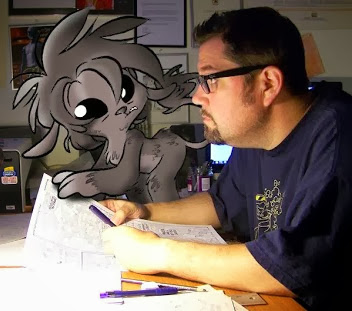 Hey all you kids out there, do we have a treat for you or do we have a treat for you? You can probably tell already that we have a treat for you, right? We recently contacted the super talented and ultra friendly Jay Fosgitt, creator of such wonders as Bodie Troll and Dead Duck among other amazing creations and asked him to participate in our 'Who is your Comic Book Crush?' questionnaire. Jay being the cool customer he is, took the time out if his more than busy schedule to give us a little insight into the working and non working mind of a solid comic book pro, join us in discovering what makes Jay tick, what gets him out of bed in the morning and the Comic Book maven that makes his cheeks ablush! Please check out Jays links in this article and drop by to show him the much deserved adulation this stand up guy deserves, you could even take Bodie a stinking root, watch your fingers though!!!
'WHO IS YOUR COMIC BOOK CRUSH?'

WHAT WAS YOUR FIRST COMIC AND DO YOU STILL HAVE IT?
I had some hand-me-down, dog-eared copies of "Archie", "Casper" and other kids' comics growing up. But the first comic book I can remember buying was issue #8 of DC's "Captain Carrot and His Amazing Zoo Crew" (1982) when I was eight years old. I'd become a full-blown comic collector only a year or so later. And yes, I still have that issue in my collection.

DO YOU BUY COMICS REGULARLY?
Not like I did from 1984 through 2000 (ages 10-26). Those were my peak years for collecting. But I still buy stuff that looks interesting every couple months or so.

WHEN YOU BUY A TITLE IS IT FOR THE STORY, CHARACTERS OR THE CREATIVE TEAM?
All three, though not always for all three reasons at once. I started collecting the "Zatanna" comic a couple years back based exclusively on the artwork. But when they put a different artist on the book, I was done with it. And I resent the bait-and-switch of a great artist for the cover of a comic, and a lackluster artist doing the interiors. It's false advertising.

WHAT WAS THE LAST COMIC YOU BOUGHT?
It was an old back issue of Marvel's "New Mutants" #22 (1984) that I picked up in a month ago. I'm more likely to buy twenty five-year old back issues than new stuff anymore, because it takes me back to my childhood.

HOW DO YOU PREFER TO READ, DIGITAL OR PRINT?
Always print. Not only because you lose some of the visual clarity with digital, but because I'm old fashioned, and like having that book in my hands and in my collection. Again, it takes me back to my childhood.

WHAT COMIC(S) HAVE PROVEN MOST INFLUENTIAL?
"Groo the Wanderer" (Epic/Marvel), "Flaming Carrot"(Dark Horse), "'Mazing Man" (DC) and "Spider-Ham" (Marvel) also ''Howard the Duck'' (Marvel), These were the comics that got me hooked as a kid, and showed me that there was room for "cartoony" artists in comic books.

EARTH IS DYING! BUT YOU’VE WON A SPOT ON THE SPACE ARK LEAVING EARTH! YOU’RE ONLY ALLOWED TO TAKE 5 COMICS. WHICH ONES DO YOU TAKE?
They'll be trades or graphic novels--Watchmen, A Tale of Sand, Hellboy: The Chained Coffin, issue #17 of Flaming Carrot Comics, and The Gumby Summer Fun Special.

YOUR FAVOURITE OR MOST MEMORABLE COVER?
Joe Quesada's cover to Origin #1 stands out for me. It's so iconic, and tells this incredible story without any dialogue.

WHO’S YOUR FAVOURITE CHARACTER?
Popeye. I've loved him and his world since I was a kid, in all the different formats.

ARE YOU READING ANYTHING ELSE AT THE MOMENT?
Most recently, I went back and caught up with Eric Shanower and Skottie Young's Oz books. Eric does an incredible job at staying true to Baum's writing, and no one knows the history to this world better than him. And Skottie's artwork is fun, electric and incredibly inspiring.

WHAT MAKES YOU WANT TO CREATE COMICS?
I'm as much a performer and storyteller as I am an artist. Comics allows me to satisfy all three creative urges, and to bring them together into something that is special and signature to me.

DO YOU WRITE YOURSELF OR DO YOU WORK WITH A REGULAR WRITING PARTNER?
I've always written everything I've drawn by myself. Even when I was drawing comics that were owned by other parties, I had a free hand to write as I wanted.

WHAT ARE YOUR WORKING METHODS: DO YOU SET YOURSELF DEADLINES? OR DO YOU WORK WHEN THE MOOD TAKES YOU?
Because I work with publishers, I know my deadlines in advance, and I just go full bore towards getting everything done in time. I'm always working--first thing when I get up 'til I go to bed.

HOW IS YOUR ARTWORK PRODUCED? DO YOU USE TRADITIONAL TOOLS OR DIGITAL OR A MIX OF BOTH?
I draw everything in pen and ink on Bristol board. I even letter my own comics in pen. I then scan my pages into Photoshop and color them digitally.

FAVOURITE THING TO DRAW?
I love drawing monsters. My own are a mix of cute and creepy. It's the perfect summation of my drawing style.

WHAT’S THE WORST BIT ABOUT DRAWING COMICS?
The quick turnover rate required by publishers and readers. You shouldn't rush art, but comics are also commerce, and commerce waits for no man. If you're not producing something new on a regular basis, your regular readers may just lose interest and move on to the next best thing.

DO YOU GO TO CONVENTIONS? DO YOU ENJOY THEM? WHICH IS YOUR FAVOURITE?
I love conventions, though they can be a challenge to attend. A lot of money, time and effort go into them that you won't necessarily recoup. So I pick shows that I feel will have the best audience for my work. I also gauge if enough of my friends will be in artist alley, because that sort of camaraderie is just wonderful. My favorite show ever is Fan Expo Toronto. It's been my most successful con to date on so many levels. I have a huge fan base in Canada, particularly Toronto, and I'll make any excuse to do a show out there.

WHAT’S THE BIGGEST CHALLENGE TO SMALL PRESS/INDEPENDENT CREATORS?
Distribution. Diamond won't touch a talented no-name, with very few exceptions. That's where cons comes in handy--there, they're reaching their audience firsthand, and it's the creators' best chance to get their work in the hands of the people.

WHAT ARE YOUR FUTURE PLANS AND AMBITIONS?
I'm currently working on the trade paperback that will collect issues 1-4 of "Bodie Troll", which is slated for a February release. I'm also thinking a lot about the next "Bodie Troll" mini series, and hoping to break ground on that soon. And I have an idea for a "Bodie Troll" book with a CD or MP3 file you could listen to as you read. I want to grow "Bodie Troll" into a level of popularity that will put him up there with the likes of "Bone" and "Harry Potter".

WHO WOULD WIN IN A FIGHT, JUDGE DREDD OR CYCLOPS (SCOTT SUMMERS)?
Judge Dredd, just because he's got more personality in one little grimace that Summers had in his almost 50 years career in comics.

WHICH COMIC CHARACTER DID YOU WANT TO BE WHEN YOU WERE YOUNGER?
I'd always pretend to be the Hulk or the Thing. I was a stocky kid and occasionally hot-headed, so I could really related to these two monsters smashing stuff.

AND WHICH WOULD YOU LIKE TO BE NOW?
I think DC's Captain Marvel (or Shazam, which I think is a great name for him) fits me quite well. I'm a kid trapped in an adults body, and still find myself marveling at stuff a kid would, and am just as easily hurt by stuff in our society that grown ups expect, but kids have trouble coming to grips with.

WHO IS YOUR COMIC BOOK CRUSH?
I've always had a big crush on Marvel's Medusa. It's gotta be the hair...
Jay P. Fosgitt is the creator of the all-ages comic book BODIE TROLL, which is published by Red 5 Comics.

Jay is also the creator of the graphic novel DEAD DUCK, which was originally published by Ape Entertainment in 2009 and became an ongoing web comic.

Jay’s other creator-owned projects are NECRONOMICOMICS, a single panel comic that lampoons horror films, which is published monthly in Rue Morgue Magazine.

Also for Ape Entertainment, Jay was the writer/artist on the all-ages comics LITTLE GREEN MEN, DINO DUCK, and OLD MCMONSTER'S HAUNTED FARM. He was also the character designer on the comic book SCOUTS.

Jay has contributed artwork for such sketch card series as STAR WARS GALAXY 5 for Topps Entertainment ARCHIE, SABRINA, and HACK/SLASH for 5finity Productions, and he's worked on every MARVEL COMICS-licensed set produced by Rittenhouse Archives since 2011.

Jay's artwork has been featured in the Eisner Award-nominated book TEAM CUL DE SAC: CARTOONISTS DRAW THE LINE AT PARKINSON'S, alongside other professional cartoonists who drew characters from Richard Thompson's comic strip "Cul De Sac", with proceeds going towards a cure for Parkinson's Disease.

Jay will also be the letterer on comic creator Guy Davis' upcoming comic, THE MARQUIS AND THE MIDWIFE.

Jay is a member of The National Cartoonists Society. He lives in Plymouth, MI with his cat, Goonie. Visit his website at: www.jayfosgitt.com. 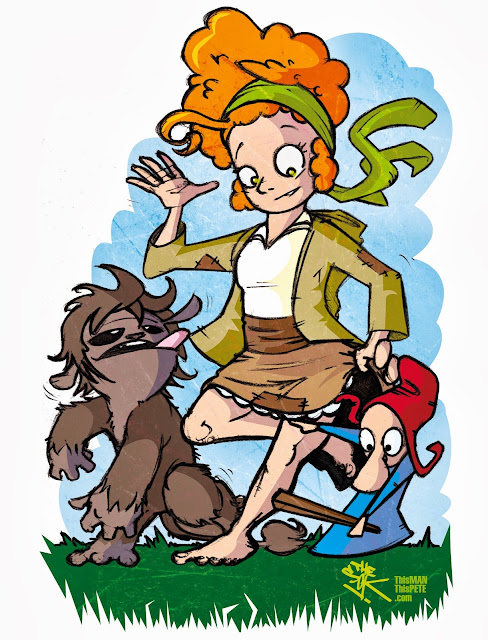