Who is Your Comic Book Crush With Mark 'Son of Ken' Hughes.

We have a busy few weeks coming up! First up some really exciting news, Copperopolis issue 3 is almost ready however we are going to need a hand to get it printed, so we have put together a Kickstarter project and sent it for review and will launch sometime this week. Next, Pete has a table at Thought Bubble just look for This Man This Pete on table 121 of the Comixology Marquee, you'll also find SoK and Ricky tagging along with Pete too. We are also going to be doing something at the Swansea Fringe Festival although we can't give any further details yet so watch this space. With so much going on we thought it'd be a great time for you all to get to know SCC artist Mark 'Son of Ken' Hughes a bit more with his 'Comic Book Crush' questionnaire. 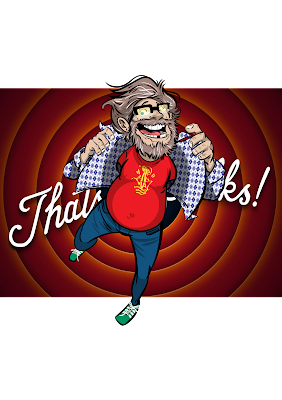 I don’t really recall what my first comic was, but I should imagine I still have it, comics aren’t something I’ve ever really traded or thrown away.
DO YOU BUY COMICS REGULARLY?
I used to buy every week when I was working in the local Comix Shoppe, now I’m illustrating full time I still buy weekly titles, but sometimes only manage to pick them up monthly.

If I’m totally honest, I have always been a buyer for the art, if I don’t like the artwork on a title I don’t usually pick it up, even if it’s highly recommended.
WHAT WAS THE LAST COMIC YOU BOUGHT?

My last pick up was a few titles, so can’t really pinpoint the last comic. Here are the latest issues I picked up at the same time.

Also picked up
The Chilling Adventures of Sabrina #8
Bitch Planet Triple Feature #3 for the Mrs.

Definitely print, but I do read digitally, I’m only fussy when it comes to collecting them, got to have the paper on the shelf.
YOUR FAVOURITE ARTIST(S)?

So many to list, I’ll have a crack though.

When I was a kid I had comics, but the first title I remember buying myself and actually going out and hunting down, was MAD magazine, I would painstakingly copy the works of Drucker, Aragones, Torres along with the endless list of amazing artists they had working for them. The European titles like Asterix, Tin Tin, Lucky Luke etc had a massive impact on my influences, I read those books until my eyes hurt, I will still sometimes draw a hand and think ‘Yes! Looks  like I copied it straight out of an Asterix book’ Imitation is the sincerest form of flattery that mediocrity can pay to greatness. Later on Tank Girl would have a big influence, I would attempt to lock away anything Hewlett drew to be recalled at a later date, when scribbling away. Although I loved reading the staple superhero comics like Spiderman, FF, X-Men etc, I was always more into cartoon strip style work.

EARTH IS DYING! BUT YOU’VE WON A SPOT ON THE SPACE ARK LEAVING EARTH!
WHICH 5 COMICS or COMIC SERIES DO YOU TAKE? THESE WILL BE THE LAST COMIC BOOKS IN THE UNIVERSE!

I’d like to say New Frontier Book Two of Six, but it’s more like Green Lantern #85
WHO’S YOUR FAVOURITE CHARACTER?

Tough one, not sure I can pin it to just one, Hellboy, maybe? 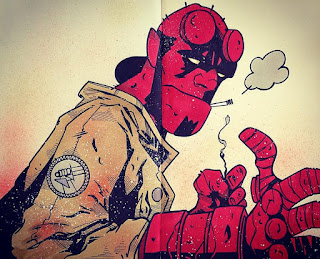 As in books, not comics? Just finished ‘The Return of Tarzan’ after reading ‘Tarzan of the Apes’ by Edgar Rice Burroughs. I drew a picture of Tarzan and wondered how come he never had a beard, a friend told me it was explained in the book, sure enough it was. I’m not really much of a book reader, there’s no pictures in them!
WHAT MAKES YOU WANT TO CREATE COMICS?

I have always loved to draw, and comics are my favourite form of art, plus I get to collaborate with king nerd Pete Taylor and the other SCC clowns, why wouldn’t you want to do that?
DO YOU WRITE YOURSELF OR YOUR WORK WITH A REGULAR WRITING PARTNER?

Never really been a writer, always been too busy drawing to write, if there’s paper and pen in front of me, my natural instinct is to draw something, not write words, I leave that to the clever people, you have to know your limits, right? I would like to try it someday, create a strip all by myself from scratch.
WHAT ARE YOUR WORKING METHODS: DO YOU SET YOURSELF DEADLINES? OR DO YOU WORK WHEN THE MOOD TAKES YOU?

In my day to day work I have incredible bosses, I have work to complete but freedom to manage my own time, sometimes we have illustrations with deadlines but I’m always given enough time to complete the tasks. When it comes to working for the comics collective, we have deadlines, I’m pretty sure I’ve never hit one! Hahaha

HOW IS YOUR ARTWORK PRODUCED? DO YOU USE TRADITIONAL TOOLS OR DIGITAL OR A MIX OF BOTH?

A mix of both, depending on what it’s for, but mostly digital now. I use a Wacom Cintiq 22HD Touch with Manga Studio for my day to day, and for creating comics.
FAVOURITE THING TO DRAW?

Anything but backgrounds!
WHAT’S THE WORST BIT ABOUT DRAWING COMICS?

Drawing backgrounds hahaha. Also repetition, along with trying to get the likenesses of the same character right, over and over.
DO YOU GO TO CONVENTIONS? DO YOU ENJOY THEM? WHICH IS YOUR FAVOURITE?

I do, I can’t always manage to commit to going, due to family commitments and the grind of life, getting in the way. Last year I got to go to Thoughtbubble with Ricky Webber to represent the SCC, that was a blast and luckily I’m going to get to do it again this year. Weirdly after 8 years of being a part of the SCC, I’ll get to attend a con with Pete Taylor, where we don’t have to drive home at the end of the day, it’s going to be a full weekend of debauchery hahaha.
I have also been lucky enough to become good friends with the amazing Justin Stewart (Colourist who has worked for the likes of Marvel and Image, with creators like Jim Mahfood and Skottie Young), who invited us out to stay with him and his wonderful family and attend the Lexington Comic and Toy Convention. I only attended the convention as a muggle, I’d like to go back one day and attend as a wizard. It’s a brilliantly run convention full of super friendly people and great guests, Steranko has a bone crushing handshake! We got to spend time with Skottie Young, Jim Mahfood, Nathan Fox, Rico Renzi and so many more great folk, proper meet your heroes event for me. We had such a great time we went back two years later, if flights weren’t a bazillion dollars I’d go back every year, I love it there.
WHAT’S THE BIGGEST CHALLENGE TO SMALL PRESS/INDEPENDENT CREATORS?

As it’s more hobby like then a full time job, the hardest part is finding the time to get work completed, along with finding the funds to get the work produced. We are lucky to have dedicated members like Ricky who travel all over the UK, even as far as Europe, pushing and promoting our wares.
WHAT ARE YOUR FUTURE PLANS AND AMBITIONS?

Hopefully to carry on working in my pants through the summer months and not have to get soaked walking to a job, that doesn’t involve me drawing. To be a good partner and father to my girlfriend and daughters. To improve my craft to a point where I don’t want to put a brick through my Cintiq. To create a body of work I can look back at and think ‘fair effort, that doesn’t look half bad’
WHO WOULD WIN IN A FIGHT, HOWARD THE DUCK VS. DONALD DUCK?

Clearly Donald Duck, anybody with the confidence to spend their whole life walking around with no pants on, must be absolutely nails!
WHICH COMIC CHARACTER DID YOU WANT TO BE WHEN YOU WERE YOUNGER?

Asterix the Gaul
AND WHICH WOULD YOU LIKE TO BE NOW?

I’ll stick with my first answer, eating wild boar with your best mate, punching Romans out of their shoes, why wouldn’t you want to be Asterix? 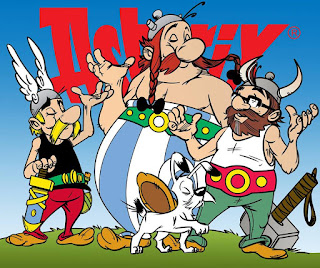