So this ones a little different from previous comic book crush posts as the guys from the "Zeroes N Heroes" podcast completed our questionnaire on episode 58 of their podcast. So rather write a whole transcript of the show I'm going to direct you to their site where it is available here http://zerosnheroes.com/2013/08/10/episode-58-tell-ya-bout-the-gimp.aspx 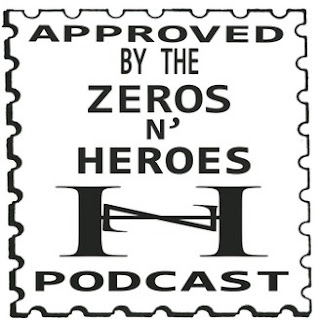 Zeros N Heroes is hosted by Trent Hunsaker, who owns Death Ray Comics in Logan Utah where he runs the A Part Of Him Podcast Network. Trent can also be heard on the Smodcast Network as the co-host of Netheads.

Trent is joined by Jonathan Ribera and Jordan Brown who are two of the co-founders of the comedy troupe Logan Out Loud who perform inside Death Ray Comics. Jonathan is also an artist who's art is available here http://jonathanribera.org/

So check out their sites to get a better idea of what these guys are about.