A day late, I know, but look! Pumpkins! 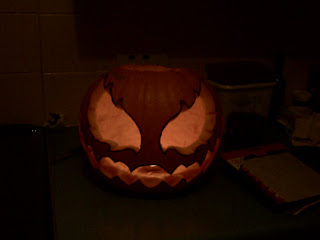 That's mine. I took a great deal of time sitting on my mother's kitchen floor, hacking, slicing and scooping and ta-da! 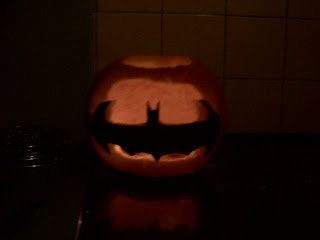 I wish I'd taken more pictures, but it's too late now, my brother and I spent a glee-filled ten minutes or so, throwing our pumpkins around the garden this morning. There aren't many things that are as awesome as hurling a pumpkin up in the air and then watching it splat upon the ground...

Posted by Wagonovic at 2:30 PM