Something you should all read...

First off, I really enjoyed the workshop. It was... an experience. Roll on the next one!
I picked this up the other day... 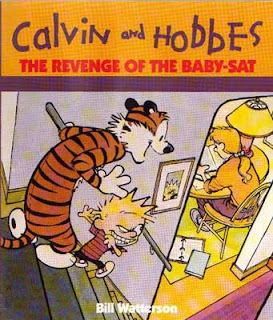 Calvin and Hobbes: Revenge of the Baby-sat (and other stories)

Written and Illustrated by Bill Watterson

If you've never heard of Calvin and Hobbes *gasp*! Calvin is an extremely mischievous six year old with a stuffed tiger called Hobbes. Hobbes seems come alive when no one else is about, and he and Calvin get into all sorts of trouble. Calvin is the best (and worst) kind of devil-child. He seems to strive to be both obnoxious and wicked. His plans and daydreams are often wanton but highly imaginative. He's the kind of kid you don't want to cross, but secretly wish you had.

Hobbes is often at his side, and seems to be an extension of Calvin's personality while still seeming to be a seperate entity. Hobbes sometimes seems to be Calvin's conscience, while other times goads him into commiting the crime. He is both the devil and the little angel sitting on Calvin's shoulder.

Bill Watterson is a great comic strip artist; not only has he created the perfect devil-child and companion combo, but through-out the pages of this collection he also shows how much of a talented artist he is with the occassional detour from his usual cartoon format, and into a more realistic comic-book style.

One of my favourite strips is a variation on one where Hobbes pounces on Calvin as he walks through the front door. In this strip; Calvin sneaks in through the window to try and trick Hobbes. I'd spoil it by describing it to you all here, so instead, pick it up!

Posted by Wagonovic at 4:10 PM

Email ThisBlogThis!Share to TwitterShare to FacebookShare to Pinterest
Labels: Bill Watterson, Calvin and Hobbes, Revenge of the Baby-sat

I agree Calvin and Hobbes is fantastic. People should definitely read this ^_^

True enough that- a fantastic book, and a fantastic strip! And hats off to BW for never bowing down to the corporate merchandising machine, even though it means i'll never be able to buy my very own Hobbes. :(

This came through on our email:

I just read your wonderful recent posting about Calvin and Hobbes and
thought I'd drop you a note. I have a book coming out in a month (it comes out at the end of December in the UK) that may be of interest to you and your readers: "Looking for Calvin and Hobbes: The
Unconventional Story of Bill Watterson and His Revolutionary Comic Strip." You can read more about it here:

Just thought I'd let you know. Keep up the great work.

--
Pre-order a copy of my book "Looking for Calvin and Hobbes: The
Unconventional Story of Bill Watterson and His Revolutionary Comic Strip"
http://tiny.cc/looking4calvin