Afternoon.
So, we've been a little slow in updating our blog the last year I know; but, now that summer is here (at the start of spring no less!), we've started getting all antsy. For a while now, talk at the meetings has always gotten back to two things: 1. Finishing our first issue of the EPICALLY FANTASTIC Copperopolis. 2. Updating our blog, to show that we haven't forgotten about you (Mr. & Mrs. Internets).
For my part I have decided to give a little insight into some of the ecclectic characters we have created for our alternative take on Swansea.
First up, I'd like to introduce to you the Sea-Monster-Slammin' Squid-Eye Guy. 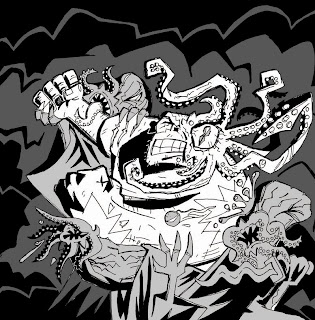 Victor Cross (Squid-Eye Guy) starts off in the 1930's as a simple jack of all trades, he happens to be working a night shift at the Copperopolis docks when he is caught unawares by a bunch of sea-monster loving cultists, and knocked out by one of these unseen assailants.
Our hapless anti-hero wakes to find himself on a stolen ship, out at sea; the latest in a line of victims to be offered up to ancient sea dwelling Leviathans. The cult plan to turn him into a half-Leviathan half-human godling as a way of attempting to control the ancient, slumbering monsters, and to therefore harness their awesome power for themselves. Of course, we couldn't let that happen to ol' Squid-Eye; it just wouldn't be right!
Halfway through the transformation, the now partially mutated Vic manages to free himself and, endowed with some of the power of the arcane Leviathans wreaks vengeance and chaos upon the cult, unknowingly aided in a small way by a mysterious helper (OoOoOoOo!).
Things don't go exactly his way though, and he finds himself fading fast and tumbling down to the bottom of an inky-black abyss.
Decades later, revived by a powerful, unfathomable energy source he rises again to find a world much different to one he vanished from, and a city in need of a hero.

Squid-Eye doesn't see himself as a leader, he sees himself as more of a loner. However, although he is gruff, blunt, often sombre and prone to monosyllabic grumblings, the rest of our ensemble cast of heroes eventually seem to gravitate towards him due to his clear headedness and natural leadership skills; they begin looking on him to give the orders.
He hates what he has become, but hates the Cult of the Leviathans even more for making him the monster he believes is. Despite this, he uses his new 'gifts' (amazing strength, super responsive healing and a kick-ass squid eye that can absorb and blast out powerful beams of sunlight), to mete out hurt on the bad guys.
One day he hopes to wipe out the Cult, and beat every last of the Leviathans senseless, but until that day he'll begrudgingly put up with beating the snot out of crooks, super-villains and assorted giant monsters.

Watch this space for the next Copperopolis character bio. And check out our Facebook page (swanseacomicscollective); as, soon, MWPete will be putting up the three page origin of Squid-Eye Guy for your consideration.
Posted by Wagonovic at 12:05 PM

Hope you don't mind me adding the logo ;)

Not at all Chief. Tried to put the other picture up, but I'm a spanner and couldn't get it to sit still.

Hey!!! You a Comic Book Artist? or even Artiste?? Do you have a flair for the awesome and enjoy tales from the Old West...with a lil' twist. Great. 'Cause I sure as shit can't draw well enough to finish my graphic novel!

So here's what I was hoping. I would like to partner with someone on this endeavour who has the time to collaborate (via the interweb and such) with me. I can't pay for your time (really selling this huh?) but consider it a labour of love...with a view to both being rich when we sell it to Hollywood.

Who knows we could be the next Ditko and Lee, Claremont and Lee, Millar and Hitch. Or two jabronis just doing what they love.

Please email me if you're interested and will send the first parts of the script along with details. If you could send me examples of your work that would be great and we can run like the wind from there!

Bit of info on me:

I'm 31. I grew up on Batman, Spiderman, the FF and Hulk. I've been reading comics since I could say the word Superman.

I write a lot. People say I'm good but I want to start doing something worthwhile with the one thing I can do. I can draw, but nowhere near the level needed for a book we can sell.

I have about a million and one ideas bursting out my head, and I desperately want to collaborate with someone who can make these come to life like never before. My plan is to submit the crap outta our finished product until we kick down the doors of a publisher who says. Oh. Hell. Yes.

I'm married. She has a thing for The Rock. I look nothing like The Rock.

Hope to see you in the funny pages. Now all I need is a swanky catchphrase to see this one off...

I can write, I can make this thing great, but dammit, I need your help! Who will answer the call (waits...awkward silence...) OK then! AVENGER'S ASSEMBLE!!! Wait, that's taken. If you want some, COME GET SOME!!! No, that too. Ah screw it.