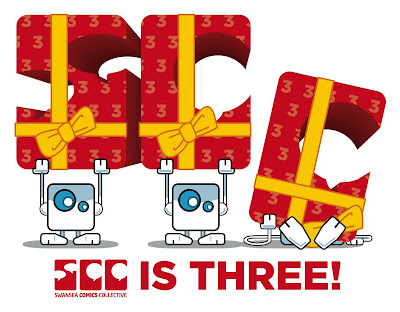 Monday 28th September will be our third anniversary. I just re-read my first post and the four main goals we had:

• To create original comics, in all its forms and genres
• To encourage and support its members in creating comics
• To meet & socialise with people who share these goals
• To share resources & publish the group's comics

I think we have put a big tick next to each of them. We've self-funded and self-published two comics and are hard at work on our third. We've built up relationships with community groups and comic event organisers and run comic workshops in Cardiff and Swansea.

Thanks to Kevin Rahman-Daultry and the staff at Port Tennant Communities First, Simon at the Comix Shoppe for all his support, Noah and all the staff of Noah's Yard in Uplands for putting us up every fortnight and everyone else who has helped us along the way.