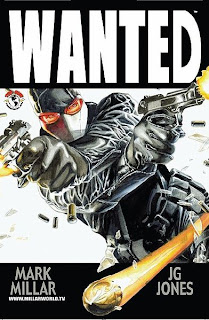 For mature readers...
And y'know people what like blood 'n' guts and dirty words...

Ok, so, thanks to Mark of the Tranter for lending me this one.
Now, if you've seen the movie 'Wanted' already (like I had), you should really have a look at the trade.
First off, it's a completely different tale. True, the movie kept a scant few things in, mostly little things like names and situations; and there are a few little parallels here and there. But over-all it's a totally different experience.
Firstly, 'Wanted', the comic and graphic novel, is a story about Super-Villains. Having had enough with constantly being trumped and beaten to a bloody mush by the world's Superheroes, the world's Super-Villains try something new: working together. They start a battle across the world to eradicate every last hero/heroine off of the face of the planet. They win and carve up the planet to be ruled by The Fraternity, five 'families' of criminal masterminds.
Having all the resources available to them, they set about wiping the minds of the ordinary, everyday population of earth so not to risk the chance of heroes ever being remembered. The Fraternity continue to pull the strings behind the scenes, but go underground, and for many years enjoy complete immunity no matter what crimes they commit.

Our anti-hero starts out (as he does in the movie) as nothing more than a simple office worker with an unfaithful girlfriend and a severe case of hypochondria. But after the particularly spectacular and messy death of his father (a legendary Super-Villain going by the name of 'The Killer'), Wesley Gibson is soon welcomed into 'the family business'. He is quickly introduced to 'The Fox' who becomes his friend and sexy bed-buddy, and who trains him up to take his father's place.

Wesley sets out on a mission to become his father's son; taking over the title of The Killer and being a very bad boy indeed. And discover exactly who it was that could have killed one of the greatest killers on the planet.

One thing's for certain, he wont find any heroes around to help him.
Posted by Wagonovic at 2:57 PM